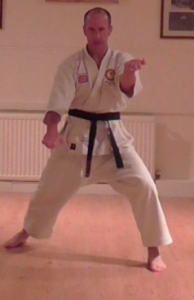 I started Shotokan Karate back in 1995 when a friend at the time dragged me to the Aldershot dojo. I continued to train there and at the Farnborough Dojo until 2001 when I took a break entirely from Karate to try Aikido for a short while. After a 5 year on off break with Karate and other sports I finally returned to it when I moved to Basingstoke in 2007 and I’ve been there ever since. In 2015 I moved to Hurstbourne Priors and started the Hurstbourne Priors Karate Club. I still continue to train regularly at Basingstoke and at Swindon with the Chief Instructor Stuart Cole.

So why Shotokan Karate? Because it keeps me fit both mentally and physically which is especially important to combat those trials and tribulations of everyday life.